Why Kevin Stefanski Might Be the NFL's Next Great Offensive Coach

The 2018 Minnesota Vikings were not good on offense. They ranked below average by DVOA, and they were a bottom-10 passing offense and bottom-three rushing offense by expected points added (EPA) per play.

The 2019 Vikings are good on offense. Quite good, in fact — halfway through the season, they rank second in EPA per pass, seventh in EPA per run and fifth in offensive DVOA. Kirk Cousins ranks second in the NFL in passer rating and second in PFF passing grade. Stefon Diggs leads the league in yards per route run (by over half a yard!). Dalvin Cook leads the league in rushing yards, rushing TDs and yards from scrimmage.

What changed? Not the quarterback, receivers or running back — in fact, the Vikings’ only new starters are right guard Josh Kline and rookie center Garrett Bradbury, neither of whom have looked like Pro Bowlers.

The difference is almost entirely coaching. Kevin Stefanski is in his first full year as a play-caller after having the interim label removed in the offseason.

A Focused Foundation with Innovative Wrinkles

“Every football team eventually arrives at a lead play — a number one play — a bread-and-butter play. It is the play that the team knows it must make go, and the one its opponents know they must stop. Continued success with it makes for a number one play, because from that success stems your own team’s confidence, and behind that is the basic truth that it expresses the coach as a coach and the players as a team.”

Stefanski’s lead play is outside zone.

Where John DeFilippo’s 2018 offense was creative, testing out concept after concept hoping to find something that would stick (leading to Rick Spielman feeling like the offense had lost its identity), Stefanski’s offense is focused. It spent all offseason and preseason drilling, training and focusing on the fundamentals of one foundational play, off of which every other play call builds.

The 2018 Vikings were not good run blockers, ranking bottom 10 in both adjusted line yards and team PFF run blocking grade. But it turns out when you spend all your time focusing on one foundational play, you tend to get pretty good at it:

The Eagles’ defense here is so focused on stopping the Vikings’ outside zone that all three downfield receivers are left wide open, and the result is a coverage breakdown and 51-yard touchdown.

But any team can run outside zone with boot action. What makes Stefanski’s scheme so effective are the wrinkles he adds on top of that foundation — like this screen pass that starts looking like outside zone left, then looks like a play action boot right, but is actually a reverse screen:

After a great play design fooled 5 giants defenders on a throwback screen, @Vikings' RB @dalvincook was off to the races. @NFLMatchup | @gregcosell pic.twitter.com/PkosGv7aPA

But great play-calling requires more than just great play design. Knowing when to call the right plays, how to sequence them and how to keep your opponent guessing is half the battle. Take this third-and-one play-call from Week 7:

The Vikings only need a yard here, so they come out in an offset I-formation in 21 personnel. The Lions crowd the box and key in on Cook. Right before the snap, Cousins sends Diggs across the formation in jet motion — one initial layer of misdirection. At the snap, instead of coming upfield, Cook runs out to the flat (a second layer of misdirection), freezing the left edge defender and the linebacker above him who were keying in on the Vikings’ top running threat.

With Diggs pulling the defense’s eyes right and Cook pulling the defense’s eyes left, fullback C.J. Ham gets the handoff in a duo run. Reiff and Elflein get a great double team on Romeo Okwara, and Ham runs right past Jones who gets caught peeking at Cook. Jahlani Tavai takes a bad angle, and Ham plows forward for nine yards when he only needed one.

So when the Vikings faced another third-and-one later that game, Stefanski went back to the same play design. Everything about this next play is identical to the prior play until the handoff: same personnel, same wide receiver splits, same offset I-formation, same run blocking. The only difference is this time the ball goes to Cook:

You can see the conflict the edge defender is put in: if he follows Cook, Ham has a huge hole to run through; if he plugs his gap, there’s no one to stop Cook but the safety 15 yards back. And even though that defender reads this play well, Cook is so explosive that with a head start, the defender cannot catch up to Cook. From there, Cook makes the safety miss to pick up 23 yards when the Vikings only needed one.

That’s Stefanski’s offensive philosophy in a nutshell: why settle for a couple yards when you could get, say, 66? Later in that same game, the Vikings got the ball up 35-30 with just three minutes left in the game. Everyone expected the run-heavy Vikings to milk the clock, so much so that Detroit came out in goal line personnel with 10 defenders near the box. The Vikings matched with three extra tight ends, and on the first play of the drive, ran inside zone for five tough yards:

The very next play, Stefanski again came out with three tight ends in a heavy run formation, and the Lions matched with the same goal line front and 10 defenders in the box. Prior to the snap, Cousins sent Diggs in motion across the formation, and Coleman followed, confirming Diggs would be one-on-one with no safety help. So this time Stefanski called a play-action shot to Diggs:

Why gain a few yards when you could have 66?

One last example of great play sequencing: on this first play, the Vikings run split zone, which is their basic zone run except Irv Smith Jr. blocks across the flow of the play to handle a backside defender:

Cook takes that run for five yards. Less than 10 minutes later, Stefanski calls a play that looks identical at first — a 12 personnel flexbone formation (two tight ends lined up on either side of the tackle, with two wide receivers on each side), with split zone action as Smith again moves against the flow of the zone run — except this play call is not a run at all:

Smith comes across the formation, but instead of blocking down on the defensive end, he blows right by him and is wide open in the flat for 26 yards.

As Stefanski said right before the season started:

“We’re in a fortunate position where we think we can be multiple. …You have to be well aware of your tendencies, their tendencies and then as a staff, you sit together and put together a plan of attack.”

In that way, Stefanski’s offense is a mirror of Mike Zimmer’s defense.  When Zimmer’s defense mugs the A-gaps, quarterbacks have to guess if the linebackers are blitzing or dropping into coverage, and Zimmer has a way of making those guesses wrong. In the same way, when Stefanski lines up in an old-school I-formation, defenses have to guess if it’s a run or play-action pass, and Stefanski seems to have a way of making those guesses wrong, too.

Daring to Be Different

As much as analysts emphasize the differences between NFL offenses, the truth is most offenses end up looking a lot alike in the NFL. Too often offenses rely on what has worked before, because that’s the way it’s always been done, and that leads to an inertia where coaches shirk creativity.

It’s not just personnel groupings, either:

Stefanski isn’t afraid for his offense to stand out and look a lot different from the NFL groupthink.  In fact, he wants to look as different as possible, because there isn’t a lot of alpha to be found in following the market. And Stefanski is trying to beat the market.

Playing to Your Players’ Strengths

But all that said, no offensive scheme is built in a vacuum.  The best offenses build their scheme around the players, rather than the players around the scheme. Why is Stefanski’s offense leading the league in play-action?  Because Cousins might have the best play-action fake in football:

Why did Stefanski choose outside zone as his foundational play?  Because while the offensive linemen may lack some oomph, they are outstanding athletes who can excel at reaching, climbing and sealing players on wide zone plays — and because Cook’s exceptional burst, vision and footwork is at its best when stretching the field:

Why is Diggs’ average depth of target one of the highest in the league when he had a lot of success last year as an underneath receiver?  Because as good as Diggs can be after the catch, he’s at his best with room to run his routes downfield:

That’s part of what makes Stefanski’s offense so potent week after week: he puts each player in the best position to succeed and builds off their strengths. So it’s no surprise that Cousins is having a career year: 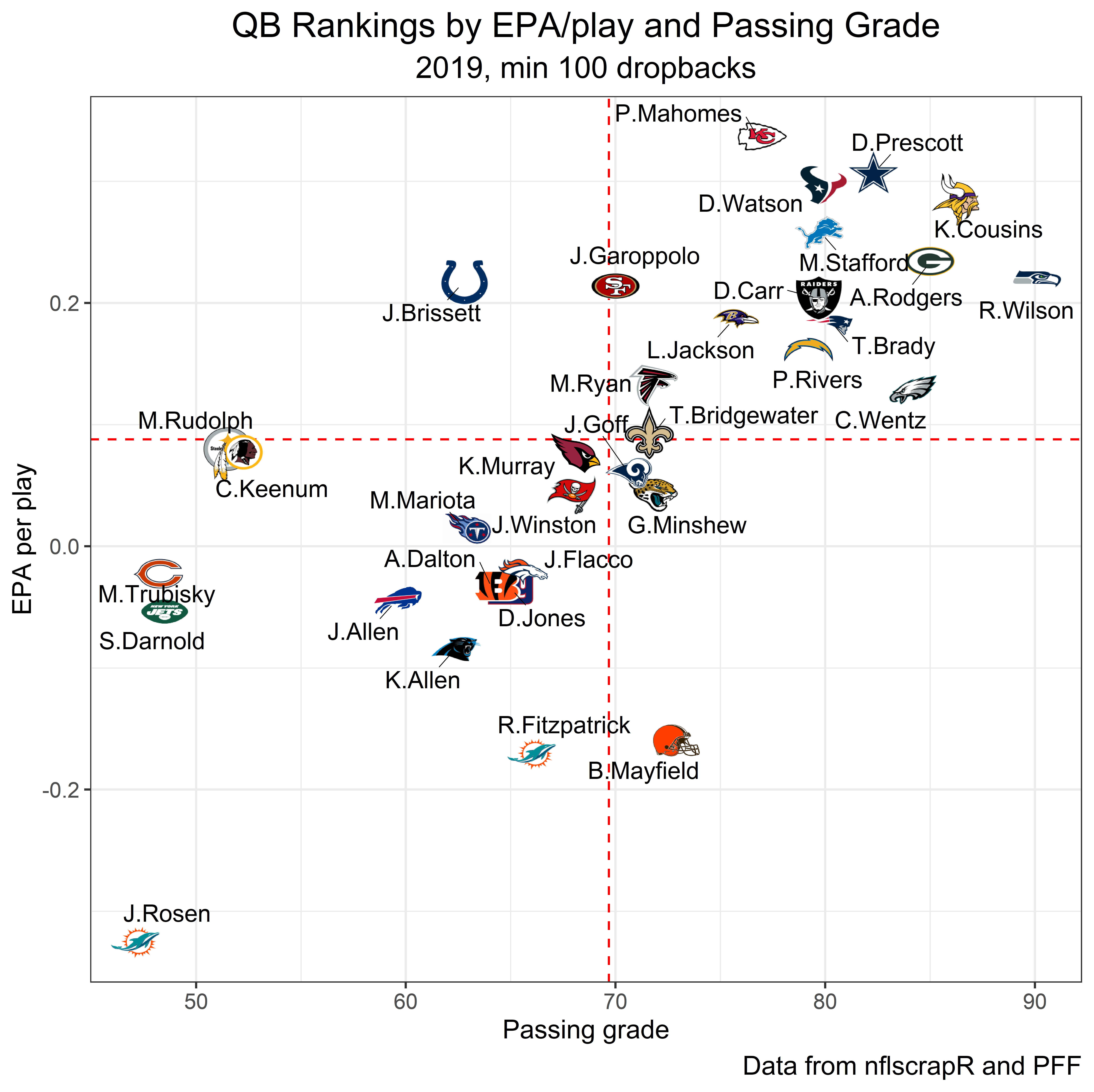 Nor is it any surprise that Cook is having a career year: 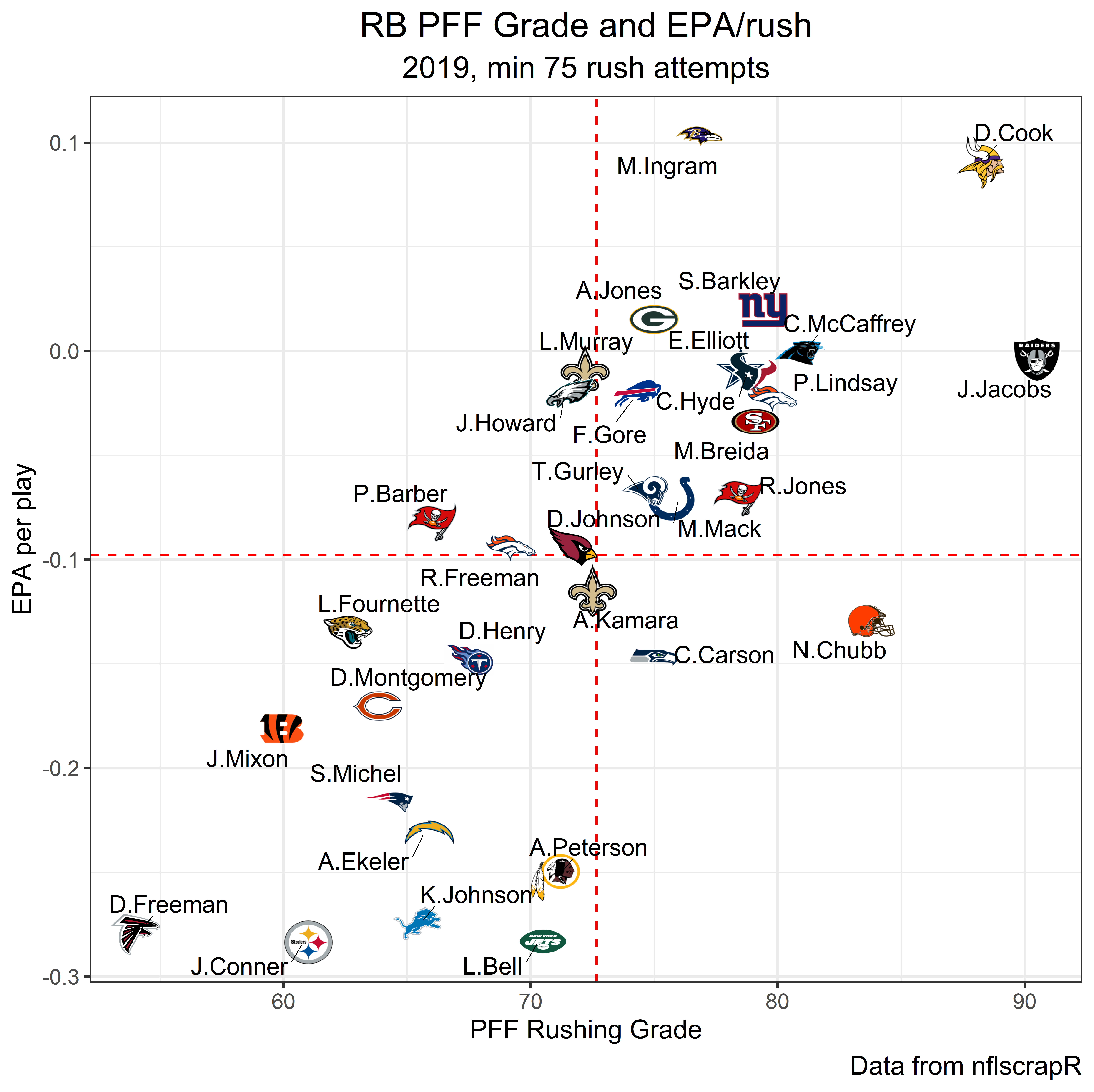 In Conclusion, Enjoy Stefanski While He Lasts

Pro Football Focus has a model that ranks the NFL’s play-callers by comparing a team’s actual results on the field with what results you might expect on average given how the team is grading.  Last year, Andy Reid, Sean McVay, Frank Reich and Sean Payton ranked as the top four play-callers on offense.  So far this year, Stefanski ranks in the top three right alongside those elite offensive minds.

So to the Vikings fans reading this, enjoy Stefanski while he lasts in Minnesota, because it probably won’t be long until Stefanski is an NFL head coach.

Nick Olson writes for Zone Coverage and Vikings Territory covering the Minnesota Vikings. His work has been featured in the Star Tribune, The Athletic, Bleacher Report and several other publications. Follow him on Twitter @NickOlsonNFL
All Articles
Vikings
This Year’s Vikings Offense Might Be the Best of Gary Kubiak’s Career
By Sam Ekstrom - Nov 14, 2019
Vikings
Kirk Cousins Breaks Down Deep Passes to Stefon Diggs
By Sam Ekstrom - Oct 13, 2019
Vikings

The New Guy No One's Talking About: What Does Josh Kline Bring to the Vikings' Offensive Line?

The Minnesota Vikings invested a first-round pick to bolster their offensive line when they selected center Garrett Bradbury in the first round. The young prospect from North […]