Throughout the years, nothing has captured the hockey fan’s intrigue quite like a goaltender’s mask. Lending mystery to the occupant, hockey goalies give fans an in-depth look into who they are through their masks, more so than the exposed face of a forward ever could. For some, it’s the ultimate form of sport expression, the one remaining form of artistic freedom that a professional athlete can partake in.

Through my childhood, I found myself obsessed with hockey. More specifically, goalies, and naturally, with their masks. I would spend hours, as many as I spent playing and watching the sport, drawing, making my own goalie mask designs in a sketch notebook. I still have that notebook, and although it’s a bit of a Zapruder Film into my neuroses, I think back on it fondly.

So what I’d like to do for you, is share with you my favorite NHL masks. This is my list, an imperfect list, and only the definitive list, according to me. I’ve scoured my memories, all of my old hockey cards, and of course, the internet for my favorites, and I’ve made a list of 100. The only rules I had were one mask per team a goalie had played for, or one team per goalie if a goalie used a recurring design. Each mask has something cool about it, something that I liked, or something that I found profoundly unique. I hope you enjoy it.

Now, a plain black helmet wouldn’t have turned heads in say the late 80’s, but I enjoyed Hiller’s mask not so much for what it was, but when it was. In 2012, the era of obscenely detailed masks was in full force, and you could say still is. Hiller himself had plenty of beauties himself, usually not on the beaten path of other masks of the time, but this one was a simplistic departure, to say the least. The matte black with shining golden bars was a very different look, and I think was appreciated for that kind of originality at that time. 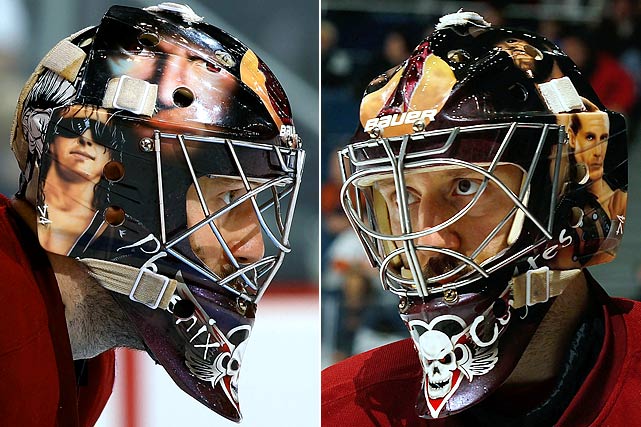 Ok, so this is a personal favorite of mine because it involved professional wrestling. Furthermore, it’s a nod to Jason Labarbera, who has featured pro wrestling more than a few times on his masks, along with Metallica, among other things he finds cool. Further background on this particular mask was that Phoenix was hosting Wrestlemania that spring, and Labarbera, being the fan that he is, wanted a tribute for it. I’m never a fan of portraits on a mask, but I’ll make the exception for well-done shots of The Undertaker, Shawn Michaels, Bret Hart and Vince McMahon. 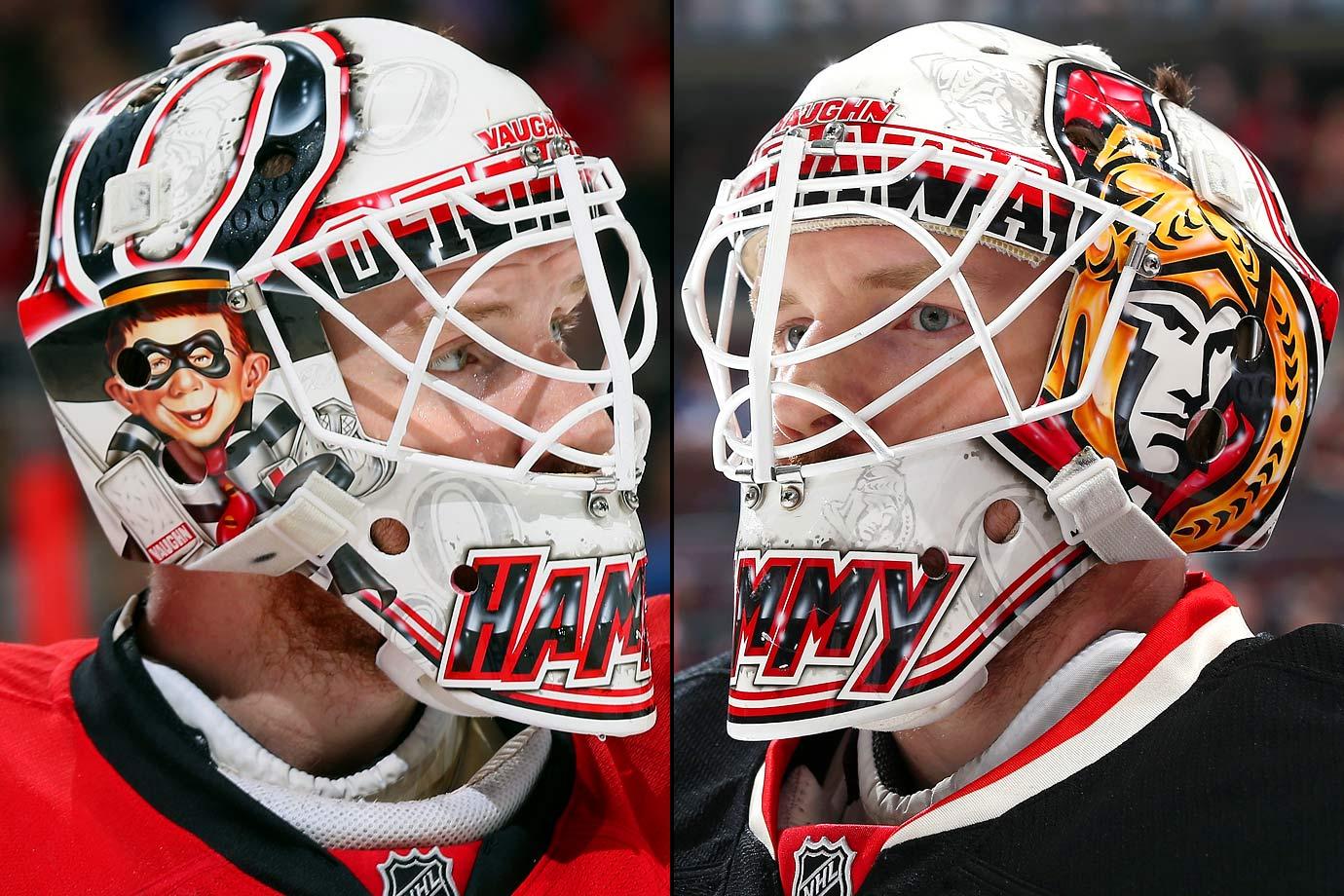 Remember the Hamburglar craze in early 2015? Andrew Hammond took the hockey world by storm with a hot streak that carried the Senators into the playoffs, before finally flaming out. Helping his popularity was his nickname, ‘The Hamburglar’ being immortalized on his mask, and stirring up an 89-cent frenzy in Canada’s capital, even leading to a loving pelting of hamburgers from the fans. What started out as a little personality on a goalie mask turned blended with a hot streak and turned into a continent-wide sensation, if for only a few weeks.

Ben Bishop earns points for originality, even if his mask was clearly inspired by the infamous ‘Tron’ movie from a few years back. Famed mask artist David Gunnarsson made this mask unique by following the movie theme perfectly, and even made the mask glow in the dark, although I’m not really sure that’s a very useful application for that. Bishop’s mask was definitely different, and playing on the Lightning made it tie together beautifully, which could not be said for his similarly decorated Kings lid.

Trevor Kidd was not afraid to take a theme and run with it, as we see here, as he went all-out with the Flames motif. Matching his custom Brians’ flaming pads perfectly was a fire breathing dragon on each side of his mask, airbrushed in beautiful detail. While this nearly breaks the meter on Peak-90’s scary animal artwork in sports, it worked pretty well, and was just one example of his masks that were something to the effect of what Kid Rock was to music at that time. Dwayne Roloson was the favorite of many young Minnesotan goalies during his time here, myself included. He understood helmet decoration at all of his NHL stops, and the Wild were no exception. While the overall design of the mask isn’t anything earth shattering or super interesting, one thing I always appreciated was how good ‘Roli’ on the front of the mask looked in a very Wild-fitting font. So often goalies will put their nicknames on the front of their mask, using some font that maybe fits the design of the mask, or maybe something zany and fun, but Roloson made efforts to integrate the team into his nickname, and I really enjoyed that.

Roloson’s nickname and team blending leads us to this mask. Very well done here, obviously, and seamlessly fits in with the mask. Beyond the chin logo that I really enjoyed, Roloson also brought a simple approach to honors the oil fields of Alberta, and forming the Oilers logo into something new without making a weird tribute to Spacely’s Sprockets.

Most of Cam Ward’s masks with the Hurricanes have featured zombie pirates, which I think is cool, considering the Pirate history in the Carolinas. The zombie part? Not so much. But this mask from Ward, paying homage to the many Naval bases in the area, and also on the flip side of mask, homage to the Wright Brothers and Kitty Hawk, in addition to pirates, is really cool. I’m not 100% positive on what the creepy eyes on the front are all about, but hopefully there’s a good story there, too. 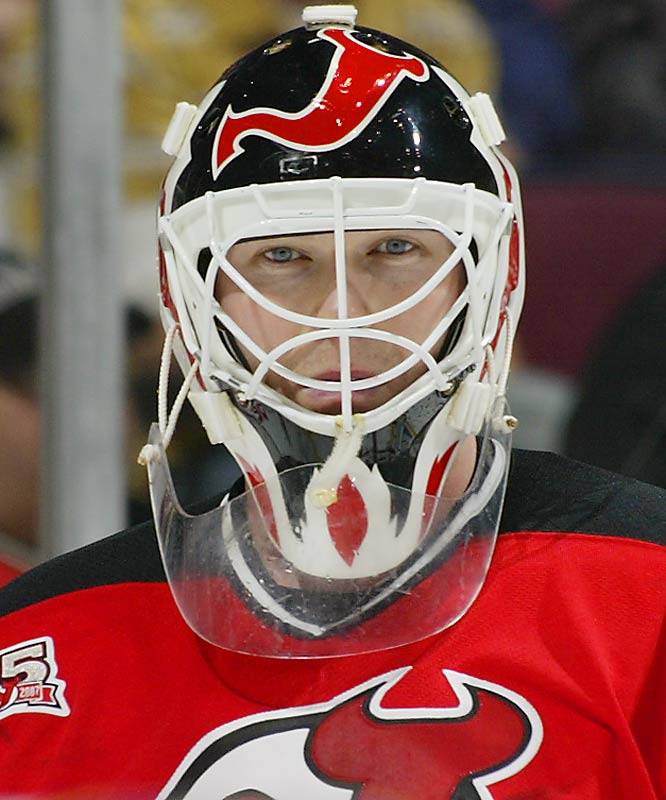 Iconic. That’s the one word to describe Marty Brodeur’s mask design of choice for a vast, vast majority of his career. It was simple, and it wasn’t flashy, but it was very recognizable. So much so, that even during his regrettable cameo with the Blues in 2014, Brodeur took the flame design with him. The story behind the N-less J logo on the top of the helmet is a good one too. Brodeur had the mask made when he was very young, and wasn’t sure if he was going to make the team, or if he would be sent down the Utica Devils, a similarly decorated, but not same logo’d team. Apparently just the J made the mask, and it stuck that way for roughly 15 years, until Marty replaced it with his own logo.

Finally, a shout out to the old school! I have several full-faced masks on this list, and not only because I want to honor the classics, but also, some of them just look damn good. Take this from Dan Bouchard, a Flames mask, that is, well, flaming, in all the right ways, but what I really like about it, is its Lucha-Libre feel. Whether that was intentional or not I’m not sure, but let’s just pretend that it was.

The Top-100 masks series ends today. I’ve had as much fun actually writing these articles as I had putting together my list, which is saying something. It’s […]