You’ve probably heard a lot about arm length in this draft cycle.

On average, offensive tackles have about 34″ arms, guards have about 33″ arms, and centers have about 32.5″ arms. That couple-inch difference doesn’t seem like much, but reach can have a huge impact on the outcome of a given play. Like in boxing, whoever has the reach advantage gets to control the terms of engagement. The 2021 draft class has a lot of short-armed offensive linemen at the top. On Arif Hasan’s consensus big board, there are eight offensive linemen ranked in the top 40.

Here are their arm lengths: 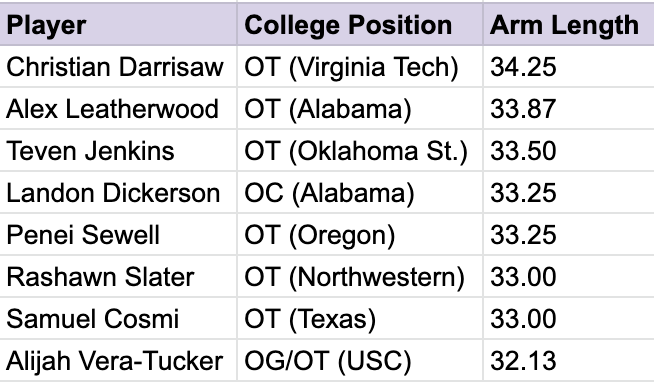 As you can see, most of these players are below average in this category. You may notice that Alijah Vera-Tucker stands out. Vera-Tucker played guard for his first two years and tackle last year but has below-average arms for both positions. For this reason, many list him as an interior player. Teams might do this too — the Minnesota Vikings have a long history of taking guys who played tackle in college and moving them to guard.

There are a lot of reasons to take a college tackle and move them to guard. Arm length is one of them, but it isn’t sufficient on its own to justify that move. Not only are there ways to overcome pass rushers who have a length advantage on you, but there are also better vectors by which to make that decision.

You’ve probably heard some glowing reviews about Vera-Tucker by now. For former Viking Ben Leber and draft veteran Dane Brugler, he’s the No. 1 offensive lineman on the board, position be damned. He has excellent balance and footwork, his athletic profile is fascinating, and his tape confirms it. His footwork, in particular, is the most exciting. As an offensive tackle, you typically have to get a lot of depth right out of your stance. The typical approach is a 3-step “kick slide” where you strafe back and prepare to accept contact. Here’s Tyron Smith explaining the basics:

These are fundamentals that not every prospect has down pat. Christian Darrisaw‘s kick slide will often stay in the same place as he reads the play, which puts him behind the curve. Edge rushers can get upfield past him, and since he doesn’t have enough depth, he has to turn his hips and try to push them past the quarterback. Rushers with bend around the edge can turn the corner before he gets there.

Vera-Tucker has very active feet against other attacks, too. In general, his technique will take him to places his good-not-great agility score can’t. He’d be extra agile among other guards, but his tested athleticism undersells his functional athleticism. He gets to his spot as well as any tackle in the class. He even employs these techniques when lining up at guard if he expects a B-gap rush.

But then there’s the problem of Vera-Tucker’s arm length. Edge rushers (33.5″ on average) tend to have longer arms than interior rushers (33.1″ on average). So if you have short arms, the interior opponents you’ll face will punish you less for that. But you may notice that the differences here are a matter of one or two inches. Football is a “game of inches,” so those little margins matter, but they’re not everything.

There are ways to overcome a length disadvantage as an offensive lineman. Even against a rusher like Gregory Rousseau, with 34.4″ arms, there are tools at Vera-Tucker’s disposal. For an example from a polished veteran, we can turn to the last short-armed left tackle the Vikings had: Riley Reiff. Players like Jadeveon Clowney, with 34.5″ arms, came Reiff’s way plenty. But he had some tricks in the bag to stop them.

First, you can pull the player into your chest. If you’re six inches from his face, his arm length doesn’t matter anymore.

Second, you can lift his arms out of the way. Nobody’s arms are too long if they’re pointed toward the sky.

Vera-Tucker has shown both of these techniques on tape. That’s the major selling point of Vera-Tucker at tackle. The two measurements that inspire a move to guard, his arm length and agility, are traits he has already shown the ability to compensate for. He has faced greater athletes and defeated them with these techniques. The jump in NFL competition will be as hard for him as it is for anyone. But the bottom line is that Vera-Tucker isn’t a guard-only prospect, no matter how short his arms are.