Why the Vikings Hired Karl Scott as Defensive Backs Coach At a surface level, Karl Scott is a puzzling choice for DBs coach. In the past, vacancies were filled by prestigious names like Tony Sparano or internal promotions like Ryan Ficken or Klint Kubiak. It’s not too often that the Minnesota Vikings reach into the college ranks. Karl Scott doesn’t have much longstanding experience either. While projected first-round pick Patrick Surtain II came up under his tutelage, there hasn’t been much else to speak of. Surtain was already a five-star recruit, so where’s the value?

That value may come from the coach whose shadow looms over all of Alabama’s staff. Nick Saban is regarded as the father of many modern defensive concepts, including match coverage. Back in the early 1990s, when Saban and Bill Belichick coached together in Cleveland, they had a four verticals problem. Saban loved to run cover three (meaning three defenders splitting the deep part of the field into thirds), and the rival Pittsburgh Steelers loved to run four vertical routes. Someone was always open, and it took advantage of the seams between zones.

So Saban and Belichick figured out that you could paper over these holes if you made a set of rules for who covers whom. Man match coverage has defenders counting receivers from outside in. The outermost receiver is the No. 1, the next guy in is No. 2, and so on. There’s space between a deep left and deep middle zone, but there’s no space between the outermost and second outermost route. This counters a lot of route concepts designed to beat straightforward man coverage as well. Since players aren’t assigned to particular players, it’s more difficult for offenses to set up matchups that they like. 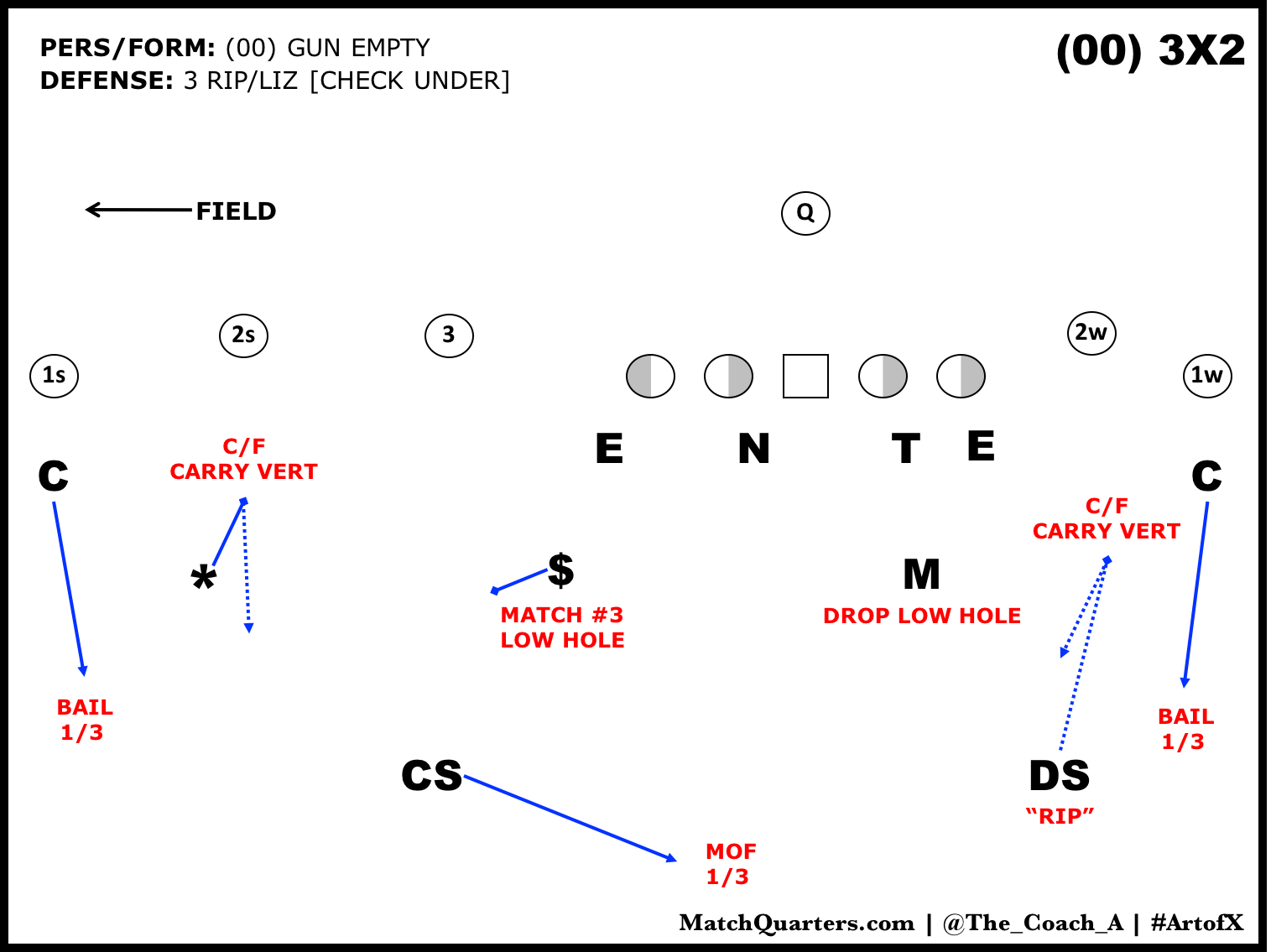 Zone match works similarly. Instead of covering an area, watching the quarterback, and breaking on the ball, defenders use man coverage techniques. The zones only serve to tell them which route to cover. If the route comes through your zone, carry that guy. From that base, Zimmer, Saban, or whoever can add adjustment tags to prevent disasters. You can tell your linebacker to cover everything that comes through his zone except for specific verticals, which he can pass off to the safety.

Without match coverage, defensive strategy is a bit of a Sophie’s Choice. You can run single-high safeties, exposing the deep seams but putting the other safety in the box. Or you can run both safeties deep, softening your defensive front and more easily picking up deep routes. With match coverage, a single-high set can still cover a play like four verticals. If the No. 2 goes vertical, as Pittsburgh would so often do, just tell that defender to carry it, and everyone else can worry about their own assignments.

Mike Zimmer has championed this concept in the NFL. This idea turned Xavier Rhodes from a pretty good cornerback in 2017 into the lynchpin of a historic effort. In 2020, youth at cornerback prevented him from running this concept. They could barely install base defensive concepts in a truncated, rookie-filled offseason program. The more complex rules of match coverage would have led to numerous miscommunications and an even poorer defensive effort.

To combat this, Mike Zimmer had to assign Anthony Harris and Harrison Smith to deep zones. He had to pull them out of the box, keep them in conservative positions, and greatly hamper their play-making ability. If you were frustrated with Anthony Harris‘s play at the end of the season, point the finger at an encumbering young core of cornerbacks.

Karl Scott’s hire seems directly targeted at that problem. Scott only coached under Nick Saban for two years. In that time, the hope is he picked up enough experience under Saban to impart that knowledge to the relatively young defensive back group in Minnesota. It also connects the Vikings to a highly touted cornerback prospect in the 2021 draft: Patrick Surtain II. From The Draft Network’s Jordan Reid:

Surtain II is well-coached in man coverage as he has the patience at the line and never feels pressured to overextend to win. He remains cautious in his approach and allows receivers to reveal their routes prior to attempting to latch on. His length is his greatest asset as he uses it as a guide while attempting to stay attached to targets.

Surtain II is a highly intelligent cover corner that has the technique and understanding necessary to be diverse in a multitude of schemes. With experience in both man and zone coverage, he’s shown to be capable of reading and reacting to creative route concepts, but also what it takes to diagnose and react with discipline within the scheme. Passing off routes in man and patterns that enter/exit his zones hardly ever prove to puzzle him.

Combine that with scheme familiarity and a connected position coach, and Surtain is a hot prospect to round out the Vikings secondary. Should they decide to bolster their secondary in the first round, Surtain would be a probable option. He has been projected to the top 10 in several mock drafts so far, so it remains to be seen. But Surtain is someone to keep an eye on.

Regardless of who the Vikings add at cornerback in 2021, Karl Scott looks to pick up where Daronte Jones left off. Hopefully, he brings a little Nick Saban magic to a Vikings defense looking to recapture its old glory with a new generation of players.